There is no more sparkle in her eyes, no more of her unique sense of humor, her sometimes corny sentimentality and her enormous heart.

She's dying now. She is shriveled and small and fighting for breath. She is diminished.

She is surrounded by a stream of family and friends who come at all hours and guarded by the pitiful sphinx of her faithful Himalayan Calico curled up on her legs.

She paws at my mother in distress and occasionally lets out a woeful meow, rendered all the more sad by her mistress' silence. She claws at her in vain. She can't hold her down. She can't keep her from slipping away.

My mama is dying.

She is surrounded by pictures, stamps and statues depicting some magical woman or other who gave birth to a god. Her name doesn't matter. She’s changed them many times. She has been giving birth to saviors since the beginning of time, but people are still waiting for them.

My dear aunts and uncles speak of rest, of my mother going off to another place, another shore, where she will be at peace. There is no pain there. She will be better there.

I don't know anything about this. Trading flesh for fancy sells the flesh short, and what is it to me this neverland of story and song? This land we are expected to believe in but are given no proof, no evidence, by an alleged deity with a sadistic streak?

If I believed in gods, I would sacrifice all of the gods of the world to have my mother back in an instant. I would make a hecatomb out of all the capricious creatures who deal sickness and misery and woe to the innocent while wicked and despot alike grow old in their beds, gods that yet have the gall to demand worship.

But I don't believe in gods.

I believe in the small woman of flesh and blood who opened the world to me and gave me the gifts of word and song, the love of color, the woman who taught me to make friends of animal and men and to look for beauty around me.

I believe in the small woman who is ebbing away. As the distance grows greater our hold on her grows weaker, the lifelines we’ve tied to hear snap one by one. They snap with a searing white-hotness that cracks your throat to shards and burns your chest. They snap and a no small part of you snaps, too.

My mama is dying. Mama is weak and skinny, and her eyes no longer focus on me.

All at once I remember being five again. My mother took me to a store that is no longer there, buying things nobody makes anymore. Some passing fancy had gotten me excited and carried off. When my interest waned I became aware of the gaping absence of my mother, and I cried. I cried and I wailed for the woman who wasn’t there anymore until some kindly matrons took it upon themselves to console me. The scene couldn’t have lasted more than a few seconds before I heard that familiar voice call my name and I saw my mother peeking at me from behind a curtain of cloth, where she had been no more than ten feet away all the time. My embarrassment was only outdone by my relief as I ran into the arms of my mother. I remember her being beautiful, like all mothers are.

I am five again and lost, my mother can no longer hold me. Her arms have no strength, her body betrayed her. Back then I cried because I feared she was never coming back.

Now I cry because I know it is so.

She is surrounded by stories. She can no longer join in, so I speak for her. “Do you remember when…” one of us begins, anecdotes are offered as memorials. Parts of a life are revealed, old places revisited, the long dead come back to memory. There’s laughter, there are tears lurking behind. Mama is a woman and soon she will be stories. My beloved aunt, her sister, died weeks ago, and she is stories and heartache now. And soon so will my mother.

Sometimes she can’t sleep, but she can’t speak to tell us why. I take my mother’s hand and I stroke it. I stroke her arm to soothe her, like she used to stroke my hand when she sat by me on those long nights when I couldn’t sleep and the shadows grew long on the wall. She smelled of cream and her touch was gentle.

She is helpless and frail and her hands shake. I can never touch her enough. I can never hold her enough. She is leaf-thin, she is becoming memory, soon she will fade into the wind. She is loved, and that love has grown thorns and it twists and turns around all of us.

I sing by my mother’s side. Here and there a friend or a relative joins in, sometimes, most of the time I sing alone. I sing to my mother the song she sang to me to sing me to sleep. I don’t cry when I sing. My throat opens up and the sound barrels out of me and through me. The pain isn’t there, when I sing, it’s just the music, my mother, and me.

But all songs have to end. All mothers have to die.

I drew this while on the plane from Houston, inspired by this Emily Dickinson poem about the end of summer: 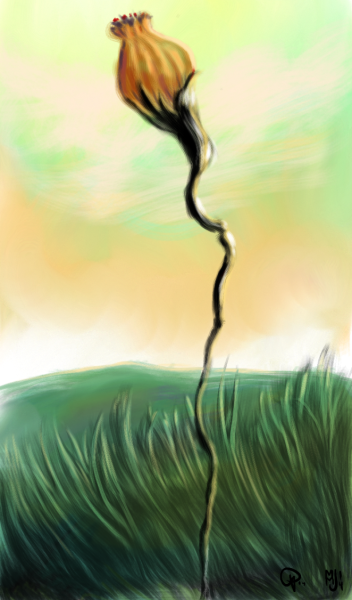 As imperceptibly as grief
The summer lapsed away, —
Too imperceptible, at last,
To seem like perfidy.
A quietness distilled,
As twilight long begun,
Or Nature, spending with herself
Sequestered afternoon.
The dusk drew earlier in,
The morning foreign shone, —
A courteous, yet harrowing grace,
As guest who would be gone.

And thus, without a wing,
Or service of a keel,
Our summer made her light escape
Into the beautiful.

And no, people here still have no idea how to drive.

Astor Piazzolla has written some of the most gorgeous music ever.

And this is no exception. Holy cow, I WANT to perform this Ave Maria by him! However, all I have been able to find are piano/voice arrangements, I cannot seem to find the string quartet scores.
Collapse